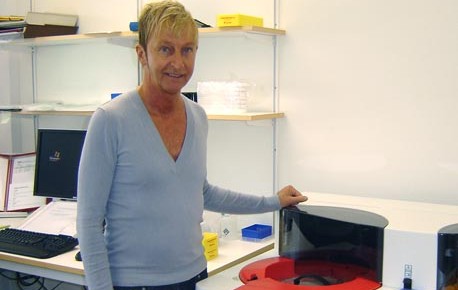 Lars Abrahamsson is working as an analytical biochemist in the field of clinical chemistry at Norra Älvsborgs Länssjukhus, Trollhättan, Sweden. He is the manager responsible for the Drugs of Abuse Laboratory. Lars Abrahamsson has been interested in the field of Therapeutic Drug Monitoring (TDM) and Drugs of Abuse for more than 30 years and developed a lot of chromatographic methods (HPLC, GC/MS) for detection of illicit drugs. He has produced over 50 articles in this field. Lars Abrahamsson is a member of Equalis advisors board (External Quality Assurance in Laboratory Medicine in Sweden) within the section of drug testing.

How popular is GHB in Sweden?
In the western and south parts of Sweden abuse of GHB as a recreational drug is very common. Our lab runs about 5000 tests annually. In other parts of the country the dissemination of GHB is less common.
The main purpose is to find GHB abuse as a recreational drug, secondly to diagnose urgent cases i.e. unconscious patients brought into the emergency ward for fast treatment.
Is there a difference to the rest of Europe?
The whole world probably uses the same pattern, primary screening to exclude negative samples and then GC/MS to confirm positive ones.
When it comes to cut off levels differences can be seen between different countries. Within Europe a number of drugs have same cut offs, however, for GHB this is not the case.
How is GHB detected in the labs today?
Generally, GHB is detected and quantified with GC/MS or similar chromatographic methods. Chromatography will still be the confirmatory method.
In general, for chromatographic methods as well as the enzymatic GHB chemistry method, it is important to collect the sample as soon as possible as the drug has a very short half-life in the body. Where sample collection has been delayed, suspected positive samples would then be measured negative.
What are the advantages of a faster and easier screening assay?
It enables a faster response as negative results can be excluded and reported the same day. This allows faster handling of patients. In our experience 90 – 95 % of the samples measured are negative.
What is your opinion about the enzymatic assay after doing the evaluation?
The assay works perfectly on our Konelab analyzer. We have not found any false negative results and no cross reactions were detected. The negative predictive value of the enzymatic assay is high. On the plus side, the assay is easy to handle and on the negative, reagents must be kept frozen.
Will you start running the screening assay in routine work?
Yes, due to the shorter response and hands on time.