Is a complete outpatient care concept developed by BÜHLMANN together with Dr. Smits for the assessment of Circadian-Rhythm-Sleep-Disorders. Sleep specialists and sleep laboratories can adopt this concept to facilitate the assessment of individuals with sleep disorders.

A large container of melatonin pills lays on the night table. After a goodnight kiss she takes three pills and he a handful. They both believe that the amount they take doesn’t matter because the pills are harmless. But does it matter? According to Dr. Marcel Smits: “Taking a dose that is too high or too low might have the wrong outcome: the biological clock could be altered in the incorrect direction.”

The right way to take Melatonin
Synthetically produced melatonin is widely used throughout the world. For example, millions of Americans take melatonin pills as a food supplement. In The Netherlands melatonin tablets are taken in large quantities as well. Here, pills with 0.1 mg of melatonin are freely available without any prescription.In the US, higher concentrations can be bought, even in supermarkets. Dr. Marcel Smits, a neurologist at the Hospital Gelderse Vallei, Ede, The Netherlands, is very concerned about the consumption of melatonin pills without proper medical guidance. Dr. Smit has been conducting research on the function and sensible use of melatonin for the last fifteen years. In 2004, under the supervision of Dr. Smits, the Hospital Gelderse Vallei started a special policlinic for the diagnosis and treatment of sleeping disorders resulting from a wrongly established biological clock.

First Steps towards Successful Therapy
People with sleep problems associated with their biological clock can receive treatment at Dr. Smits policlinic. Before visiting the policlinic; however, patients must first register and perform a self-test online at www.slaapstoornissen.nl. Then, in consultation with their general practitioner (GP)they discuss the outcome of the self-test. When the outcome of the test appears to be positive for biological clock problems, the GP can send the patient to the melatonin policlinic for treatment 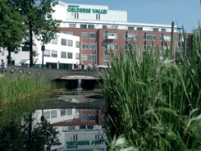 Before visiting the policlinic, staff at the clinic send patients a Sleep Check Device, which contains five saliva collection devices called salivettes. During an evening, a patient chews on the salivettes for at least one minute each time and repeats this hourly until all five salivettes have been used. The next day, they send the salivettes by mail to the hospital for analysis.
Definition of Individual Biological Rhythms

Once the salivette tests arrive at the policlinic, technicians measure the amount of melatonin in the collected saliva. This makes it possible to calculate the starting point of melatonin production by the pineal gland. This time point, the ‘Dim Light Melatonin Onset’ (DLMO), not only indicates whether treatment with synthetic melatonin makes sense, it also indicates the effect of it. The later the starting point of DLMO, the more powerful the result the melatonin intake will have, provided it is taken at the right time.

By taking synthetic melatonin it is possible to move forward a persons own melatonin production in the pineal gland. When the biological clock is set too early, melatonin must be taken 10 hours after DLMO. This will push the melatonin rhythm to a later starting point. More than 60% of our adult and 80% of child patients have reacted positively to our treatment!
Inappropriate Melatonin Intake can Cause Opposite Effects 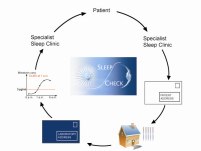 Dr. Smits believes that there is an increase in the number of patients being prescribed melatonin pills in the wrong manner. “A lot of well-intentioned GP’s prescribe melatonin as a soporific, while it should be only used as a biological clock agent. Melatonin should be used only when a doctor has the information about the own melatonin production of the patient. Many patients are taking melatonin at the wrong point in time. For others the dose of melatonin is too low or too high. Taking melatonin incorrectly could produce the opposite of the intended effect. In other words, the biological clock could change in the wrong direction.

When people come to the policlinc, they must wait three months before we can do something useful. It takes twelve weeks after stopping medication before the normal rhythm of melatonin production is back. Sometimes this bridging time is far too long for patients who are deperate. In this case, we try to do as much as possible to help them.

Target-oriented Diagnosis and Therapy is an inevitable Need
According to the current literature on sleep disorders, in more than 10% of the people with chronic sleep problems, the reason lies with their biological clock. Based on the experience of Dr. Smits, the amount of this kind of disorder is much higher at approximately 30%.

“It is understandable that people with sleep problems will try anything to regain normal sleep habits. However, it is important that the cause of the problem is found as soon as possible. Normal hypnotics do not, or have hardly any effect on disorders of the biological clock. Unfortunately, sometimes people continue taking these hypnotics for years with an increasing dose.”, says Dr. Smits.

We hope that in the near future the Sleep Check concept, established by Dr. Smits, will be utilized throughout Europe and North America to guarantee the best possible care for patients suffering from biological clock sleep disorders.