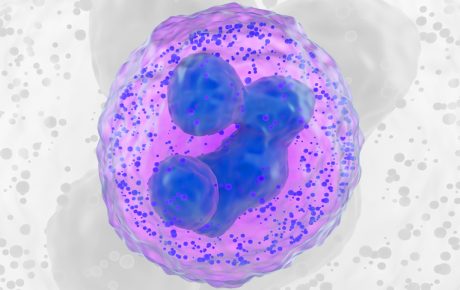 3 Reasons to Consider this Method in Kinase Inhibitor Drug Development

Basophils are the circulating immune cells of allergy that share many of the signaling pathways that are also present in other immune cells and are responsible for diseases such as cancer and autoimmune disorders. Several drug development projects are focusing on inhibition of these pathways in order to slow or prevent progression of these diseases (4). Key kinases targets like SYK, BTK, PI3K δ and γ are main components in the basophil activation signaling pathways. As Cromheecke et. al describes “The multitasking capability of basophils enables them to serve a unique role in bridging innate and adaptive immune responses (2).” Therefore basophils are becoming a significant focus for kinase drug development and provide a range of opportunities offered by basophil activation.

The primary function of basophils is to degranulate upon stimulation and activation by allergens, releasing pro-inflammatory mediators, and this functional effect can be easily measured in flow cytometry by quantifying the expression of cell surface activation markers such as CD63. In the course of the years, the unique properties of basophils as biomarker of allergy have promoted the development of Basophil Activation tests (BAT). BAT have been extensively standardized in terms of reagents and protocols since, used as an in vitro functional assay, it has demonstrated superior accuracy as compared to other blood tests in the diagnosis of allergy (11).

B-cell receptor (BCR) signaling pathway, has emerged as a crucial player in the survival, proliferation and trafficking of malignant B cells and key kinases responsible for constant activation of this pathway, have been demonstrated a concrete target to treat B Cell Lymphomas (10). Ibrutinib and Idelalisib, BTK and PI3Kd inhibitors, respectively, have been recently approved for the treatment of relapsed or refractory chronic lymphocytic leukemia (CLL), follicular B cell non-Hodgkin’s lymphoma and small lymphocytic lymphoma. Several second generation inhibitors for these kinases as well as SYK inhibitors are at different stage of development (15).

More than allergy, BAT can offer solutions in many steps of the Drug Development process, including functioning as a surrogate biomarker for the activity of inhibitors of PI3K, BTK, and SYK. Therefore, this tool can provide a successful mix of easy data analysis, accessible cells, inter-laboratory standardization and the adaptability to the high throughput technique.

Flow cytometry has played an important role in drug development for many years however there have been limitations when performing phenotypic screening (i.e. screening to identify small substances that alter the phenotype of a cell, tissue, or other organism of study). At the time that plate-based sampling was introduced for use on flow cytometers, it added tremendous value to flow cytometry as a drug screening platform and helped to overcome those limitations. In fact, the introduction of faster sampling technologies, peripheral automation, and liquid handling further enhanced the capabilities of flow cytometry as a drug screening tool and converted it to high throughput flow cytometry (HTFC) (4,5).

Wise S. et al. has developed a HTFC screening assay for their compound based on basophil activation by modifying the BUHLMANN Flow CAST® Kinase Inhibition Assay to be scalable for high throughput screening. This scientific poster describes how researchers at Gilead Sciences produced “a robust and automated 384-well whole blood basophil activation assay. The miniaturization was achieved through multiple rounds of red blood cell lysis and washing in deep well 384-well plates using Agilent 70 µL wide-bore 384-well tips. Both lymphocyte integrity and complete red blood cell lysis are maintained as compared to the 96-well format. Inhibitors of basophil activation perform similarly in the 384-well and 96-well formats. This miniaturization and automation allow for increased throughput of compound testing in lead optimization efforts and reduce the FTE resources required (15).”

Preclinical, evaluation of the efficacy of inhibitors of key kinases involved in the growth, progression, and spread of cancer and autoimmune diseases

Several scientists have started to use basophil activation as a surrogate biomarker of the potency and efficacy of their compound in development in order to quantify the inhibition of the basophil activation. Once a potential kinase inhibitor is identified, it must be fully characterized in order to explore its concrete effect on whole cellular functions. In basophils, there are several pathways in which activation results in degranulation and scientists can tightly regulate the activation of these pathways by the use of different activators. For instance, cross-linking the high affinity receptor for the IgE, FceRI results in the activation of a pathway controlled by the PI3Kd and BTK,fMLP on the contrary will activate a PI3Kg basophil degranulation.

Lannutti et al. is an example of research focused on small molecule inhibitors to identify a novel targeted approach for the treatment of patients with B-cell malignancies. One of the first descriptions of the in vitro characterization of the CAL-101, idelalisib (the first in class PI3Kd inhibitors FDA approved for the treatment of CLL) is provided in this study,, “Phosphatidylinositol-3-kinase p110δ serves as a central integration point for signaling from cell surface receptors known to promote malignant B-cell proliferation and survival. This provides a rationale for the development of small molecule inhibitors that selectively target p110 as a treatment approach for patients with B-cell malignancies (6).”

This study further explains that the signaling in basophils can be monitored by flow cytometry. It has been demonstrated in recent research that FceRI signals through p110δ while formyl-methionyl-leucyl-phenylalanine (fMLP) signals through G-protein–coupled receptor-p110ɣ. In addition, it has been clear that both stimulus result in the expression of CD63. Since it is known that p110δ promotes malignant B-cell proliferation and survival because it acts a central point for signaling from cell surface receptors, Lannutti et al focused this study on the blocking effects and capabilities of CAL-101 (a highly selective and potent p110δ small molecule inhibitor). “For the analysis of p110 δ and p110 ɣ signaling, basophil activation was measured in isolated peripheral blood mononuclear cell or whole blood using the Flow CAST® kit according to the manufacturer’s standardized methods (BÜHLMANN Laboratories AG).” Researchers were able to demonstrate that CAL-101 blocked constitutive phosphatidylinositol-3-kinase signaling, resulting in decrease in downstream effectors, increase in poly (ADP-ribose) polymerase and caspase cleavage, and ultimately apoptosis.

More specifically, Lannutti et al. was able to determine the half-maximal concentration at which CAL-101 blocked both FcεRI p110δ mediated CD63 expression and fMLP activation of p110ɣ. Thus, the results of this study clearly provide a rationale for continued evaluation of CAL-101 as a targeted B-cell malignancy treatment (6).

CAL-101, idelalisib is the first in class PI3Kd inhibitors. Second generation inhibitors might demonstrate superiority in activity and selectivity in PI3K inhibition. Basophil activation is a valuable in vitro tool to demonstrate a better potency of new generation inhibitors than idelalisib. O’Farrell M, et al shows data on PWT143, highly selective PI3K delta inhibitor that has been selected as a development candidate. “PWT143 exhibits low nanomolar potency in cellular phosphorylation assays against PI3K delta. PWT143 exhibits cellular selectivity of 2200-, 30- and 700-fold against the alpha, beta and gamma isoforms, with no activity against approximately 500 other kinases tested, including mTOR. Low nM potency has also been demonstrated in a whole blood functional assay of basophil activity which is encouraging for translation to the clinic PWT143 inhibits PI3K delta mediated cellular activity in activated immune cells (Raji cell line, primary basophils) with low nM IC50, even in the presence of whole blood (8)”.

“The vast majority of experimental cancer drugs fail during the later stages of clinical development – after considerable time and expense has already been invested. The right biomarkers could help weed out unsuitable candidates early on, and focus efforts on therapies with real potential.

Critical decision points need to be brought forward, ideally into the initial stages of clinical development (Phase I), before costs, timelines and patient numbers escalate. The shrewd application of biomarkers in early-phase clinical development can help to make these critical go/no-go decisions in time“

Basophil activation as surrogate biomarker of the potency and efficacy of kinase inhibitors is an effective pharmacodynamics (PD) biomarker of drugs in early clinical phase studies. Basophils are easily recovered from the blood of the patients and/or donors before and at time points after the drug intake. Monitoring the ex vivo inhibition of basophil activation during time is a reliable effect on target that help in establishing the right therapy dosage when compared with pharmacokinetic (PK) data (11).

Horak et al demonstrated “in a phase 1 proof-of-concept study idelalisib is well tolerated when administered at a dose of 100 mg twice daily over 7 days in subjects with allergic rhinitis”. They began their study focusing on the preclinical indication that “anti-FcεRI–induced basophil degranulation, as assessed based on surface expression of CD63, is potently inhibited by idelalisib”.” The authors carried out several ex vivo basophil activation assays after patient stimulation with grass allergens in both normal donors and patients treated with several dosage of idelalisib. The data showed that “idelalisib inhibited ex vivo basophil activation” and the PD data was valuable in evaluating the efficacy of the various dosage of the drug tested (3)”.

The use of basophils as PD biomarker is becoming a standard in early phase clinical study, an example can be found in Moreno et al. the “Effect of treatment with a second generation PI3Kd inhibitor, ME-401, on a PD marker for PI3Kδ inhibition: basophil activation assessed via measurement of CD63 expression by flow cytometry, following ex vivo stimulation with an anti-FCeR1 monoclonal antibody (7).”

One common parameter tested in BTK inhibitors is the BTK occupancy that is correlated with the pharmacokinetics of the drug. However, as for PI3K, the evaluation of PD data is extremely helpful to speed up decision process in early clinical phase study. Basophil activation as PD biomarker for the first in class BTK inhibitor, PCI-32765, Ibrutinib, has been extensively evaluated. Advani et al. showed effective “Pharmacodynamic activity of ibrutinib-treated patients in the various cohorts as determined by percentage of CD63+ basophils on a–immunoglobulin E stimulation of whole blood collected at 4 (day 1, day 8) and 24 hours (day 1, day 8, day 15, day 29) after drug administration as compared with predose baseline (set at 100%)”(1).

Second generation BTK Inhibitors take benefit from the use of Basophils as PD biomarkers. As indicated in Smith et al. “BTK-dependent CD63 expression on basophils occurs upon stimulation of basophils with anti-IgE and thus measurement of CD63 expression by flow cytometry is a PD marker for inhibition of BTK activity in basophils by PRN1008”. In conclusion, Smith et al. demonstrated that BTK occupancy with a daily dose of ≥ 300mg reached therapeutic levels, was safe and well tolerated after single and multiple day dosing and is evident in the amount of inhibition of basophil activation (11). Michele Romano, PhD, is responsible at BÜHLMANN for the Product Management of the CAST® Assays for Basophil Activation Tests (BAT) in the field of in vitro allergy diagnosis as well as in the promising new application of drug candidate potency and efficacy testing.

He received his PhD degree in Cellular and Molecular Biology and Pathology at University of Verona, Italy and a degree in Industrial Biotechnology at University of Milano, Italy. He has joined BÜHLMANN in 2011, after a research career in the immunology field both in Industry and Academia, with the main focus in functional bioassay development and immune receptor characterization.