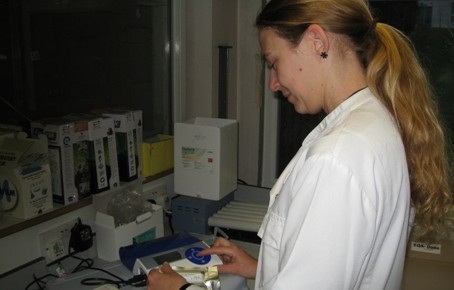 Quantum Blue® Calprotectin in the UK

Dr. Tracey Staughton is working as a clinical scientist in the Biochemistry Departement of the Royal Berkshire Hospital in Reading, UK. She is, among other projects, responsible for the calprotectin determinations at this hospital.
Tracey and her team have adopted the BÜHLMANN Calprotectin Rapid test Quantum Blue®in 2010 and are now routinely providing calprotectin results for the gastroenterology department.

Since when and why are you using the Quantum Blue® System by BÜHLMANN?

Evaluation of Quantum Blue Calprotectin started in October 2010 following attendance at FOCUS 2010 where the Quantum Blue system was exhibited.

Until this point, any Calprotectin requests received from within the hospital where sent to Kings College Hospital, London where results were turned round in approx. 14 days. At this time we were seeing around 1 sample per month so this service was more than adequate.

During 2009, the number of requests began to rise and during 2010 it was decided that we should look at bringing the test in-house and reconsider its place in our diagnostic pathways based on the lead given by King’s in this area. The Quantum Blue Calprotectin test and reader made this decision easier.
Did you evaluate comparability of the Quantum Blue® with the BÜHLMANN calprotectin ELISA results from King’s College hospital?

Yes, the introduction of the Quantum Blue® has allowed us to process the samples as they arrive into the department quickly and easily and provided us with results that compared well to those generated at Kings, which are run with the calprotectin ELISA.

Could you introduce this new technique without any delay?

Introduction of Quantum Blue® into the department has been very easy. Staff like using the system and the extraction step is made as easy and straightforward as it can be using the Smart Prep device also supplied by Alpha Labs and validated for use with the Quantum Blue® tests. 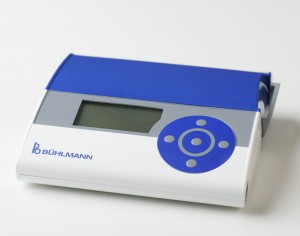 Who is requesting the calprotectin results from your laboratory?

At the Royal Berkshire NHS Foundation Trust, we have 4 Consultant Gastroenterologists and all of our Calprotectin requests are generated from within the hospital. We do sometimes receive requests from General Practitioners, but these are at the specific request of a member of our Gastroenterology team.

Will the requests expand to outside the Royal Berkshire hospital and to paediatricians?

We do not currently receive requests from our GP population, but this may change depending upon future funding arrangements. We are also seeing an increased number of requests being generated by the paediatric team.

Did you already start to have requests for IBD therapy surveillance?

Yes, in terms of clinical utility, the test is being used to monitor treatment in our Crohn’s patients and to aid differential diagnosis between irritable bowel disease and inflammatory bowel disorder.

How do you manage data interpretation?

In terms of reporting of results, we currently use a cut-off level of 60 ug/g and do not comment on the results obtained. Clinical interpretation is carried out by the relevant Gastroenterologist. The service provided is currently the subject of an internal Audit exercise and we are awaiting results of this.

Thank you for this interview.