The published evidence for the clinical validity of the calprotectin ELISA and Quantum Blue® rapid test is ever increasing and described for the diagnosis of IBD vs IBS, as well as for the monitoring of IBD patients during the course of their disease. Please find the printversion of the study summaries here.

Value of fecal calprotectin in the evaluation of patients with abdominal discomfort: an observational study. Manz et al. 2012

Over 550 patients presenting with abdominal problems at the University Hospital Basel were prospectively investigated in this study that very well reflects the situation at a secondary care centre. All patients underwent endoscopy and were tested for calprotectin with the BÜHLMANN test The work was done over a period of 4 years and numerous lots. Calprotectin reliably discriminates organic from non-organic disease patients with high sensitivity and specificity. The overall diagnostic accuracy was 85% when 50 μg/g was used as cut off value(see Fig.1a and b). The labwork showed that the BÜHLMANN test discriminated IBD from IBS assay significantly better than a polyclonal ELISA (Fig2). 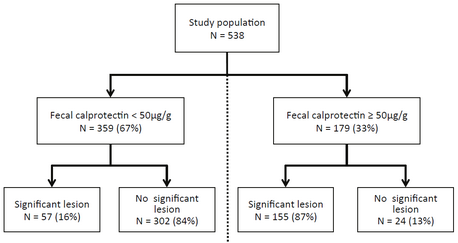 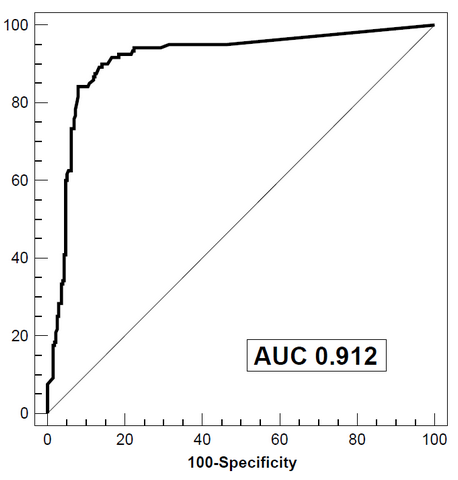 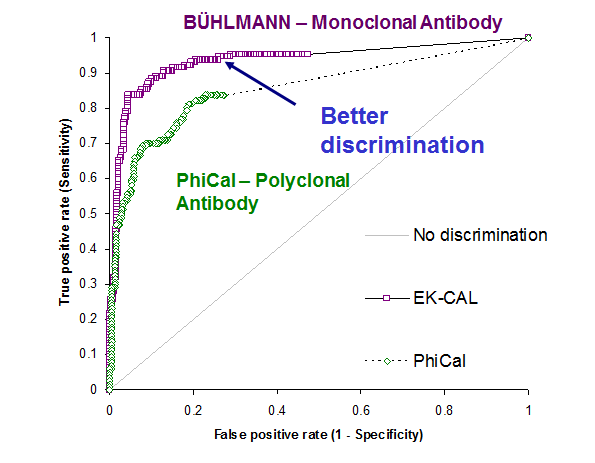 The group of Beglinger and Manz conclude that in patients with abdominal discomfort, fecal calprotectin is a useful non-invasive marker to identify clinically significant findings of the gastrointestinal tract, irrespective of age.

A Canadian study within the group of Richard Fedorak at Univ. of Alberta to contrast fecal calprotectin levels in patients with inflammatory and non-inflammatory intestinal diseases (Fig.3) and compare the results obtained from the standard BÜHLMANN ELISA-based method with those obtained from Quantum Blue®.

The group around Drs. Guardiola and Lobaton presented very interesting data on the capability of the Quantum Blue® and the BÜHLMANN ELISA to gain calprotectin results that correlate well with the mucosal healing in Crohn’s Disease and also UC patients (Fig.4). In UC patients the calprotectin levels were correlating very well with Mayo Mayo score classifications thus discriminating well the serious cases from the others (shown in figure 5). 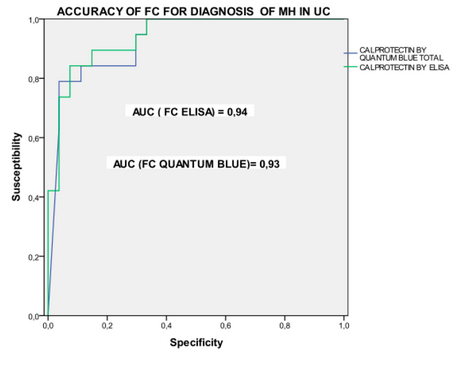 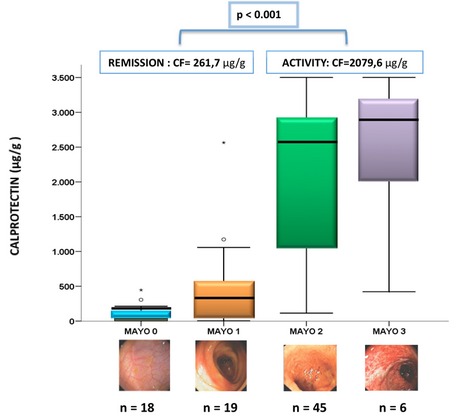 The conclusion is that calprotectin is an accurate biomarker for endoscopic activity/mucosal healing superior to CRP. The cutoff level of 250 μg/g offers high sensitivity and specificity to predict mucosal healing. Lastly, the good correlation between the Quantum Blue® and the BÜHLMANN ELISA enables to use the rapid test to take fast and adequate decisions.

Coorevits et al. from Roeselare, Belgium performed a comparative study between Quantum Blue® and the BÜHLMANN ELISA, both used routinely by the department of gastroenterology. The ELISA, which showed superior sensitivity compared to the CALPRO polyclonal assay, shows good correlation to the rapid test for the discrimination of functional vs. organic diseases as well as for the follow up of diagnosed IBD patients during therapy (Fig.6) 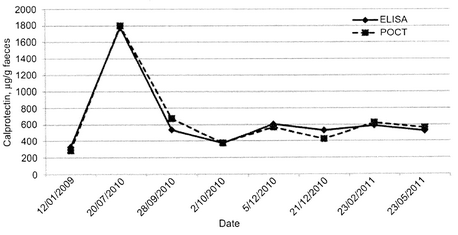 Conclusion: Quantum Blue® can serve as reliable alternative to the ELISA, thus a colonoscopy can be postponed awaiting the Quantum Blue® result known within an acceptable timeframe.